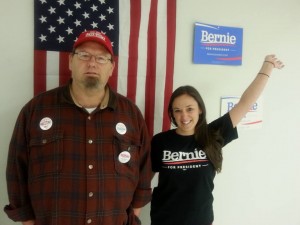 Hello. Yesterday I returned from Nevada after a couple of days canvassing in rural areas. While I was there the days were pretty warm, I can’t say what the weather is going to be this week-end or during next week. My first day I went out to an area about a half hour from Fernley with another volunteer, Tammy. We had a number of challenges that come with “the country.” None of them were the people. The people were fine, with no rudeness, let alone hostility. And yes there were several Bernie Sanders supporters. The main other opinion expressed was a near, but not quite, universal dislike of the DNC-candidate. This, I believe, points to a reason to fear, in a very real way, the DNC-candidate winning the nomination.

We would really need for her to beat the RNC because the horror would be less, and I think we could all agree that horrible economic destitution in Flint Mi. with potable water would be better than horrible economic destitution in Flint, MI. without potable water. The trouble is that with a DNC-candidate primary victory, lead in the water will cease being a novelty because she will not be able to win. Only Bernie can win.

Among Bernie supporters, there is a strain of anti-DNC-candidate discourse that has already damaged her electability. Additionally, many Bernie SUPPORTERS–wisely or unwisely–will not support or vote for the DNC-candidate. Now I think that is foolish, but that seems to be the situation. More additionally, what the hell am I going to say to people to encourage them to vote for the DNC-candidate if she wins the primary? She’s a woman? All the people who are impressed by that are already voting for her. I, and a lot of people like me, those who will be left, who try to get the DNC-candidate elected, are going to have an empty quiver, and little energy to pull a bowstring. If she wins, she gains support little more than she already has, support that will be quite spent. But how about the actual VOTERS, those who don’t read or write on the computer about Bernie, who don’t phone bank or belong to a group, etc.. just the vast majority of garden-variety (potential) voters? Does the DNC-candidate gain voters with a primary win? Not much, if my experience canvassing (or 25 hours of phone banking) means anything.

My Phone banking and 2 1/2 days canvassing have revealed an endemic lack of support for the idea that either randomly selected (or in the case of the canvassing, slightly culled) voters will vote for the DNC-candidate. They will vote for Bernie, but they will either not vote, or vote for the RNC if the DNC-candidate wins the nomination. Either way, we get the same result, poisoned water. So what has this to do with Nevada canvassing? Absolutely everything.

We who are active, for whatever reason, have responded to this historic moment. I am speaking more for those who contribute or sincerely want to contribute, rather than for those take these forums as an opportunity for self-gratifying criticism of people working in earnest. We have responded to both Bernie’s message and to his campaign’s integrity and the power it has built. We have focused on building a rational future, but I think we may have lost sight of the persisting realities we are trying to change. If we don’t win, if Bernie Sanders does not win the primary, the RNC will win the election. We will all be heading to a very bad place together. Nevada is unmercifully important for a Bernie primary victory. A defeat will not guarantee our opponents victory, but we NEED Nevada!

If there is any way under heaven or beyond you can get to Nevada to get out the vote, do it. Unless going presents a real hardship for your family (whether your family is one or fifteen people) make the sacrifice and go to Nevada. We need to get that vote out!

Now, I am not here to offer my superior expertise to the people coordinating the campaign. I have seen them at a distance and up close and know they are doing it right. I completely defer to their judgement in how the campaign does its thing. I, however, want to mention one thing that I think that they feel might not be useful coming from them.

With respect to Nevada, the rural vote is very important. For example, I was shown an area in a very rural area that is also a very RNC heavy area. That area has one registered Democrat, and has one delegate…, so, if we get that one registered Democrat we get that one delegate. BOOM. It is not that way for all rural areas, but I think you get the picture. Here is the problem: Getting people to the rural areas, and working the rural areas is more challenging than in the more urban areas. It takes a vehicle and it takes just a little more tenacity to keep on keeping on.

As I have said a couple of times, the people are NOT the challenge, the logistics are the challenge in rural areas. Earlier I said that we need you to make a sacrifice and go to Nevada to get out the vote. I stand by that, but we need to be as smart as possible to be as effective as possible and conserve our energy and our unity. Some people, at much sacrifice (reasonable sacrifice) can make it to Reno, for example, and can go with a group door-to-door in a supportive group. And that represents the maximum they can do without harming themselves. Others can drive to Winnemucca and take a handful of maps and addresses and strike out on their own none the worse for wear. On my second day and a half, I headed out an hour away from Fernley and was fairly out in the boonies alone. It was hard on me, because my eyes are weak and and I had trouble seeing the addresses and street signs (think boonies) and I do not organize objects well so I was fighting my paper-work and my parking brake (I kept forgetting it was on when driving from block to block.) I pressed on, however, and fought through my challenges to get the job done. There is nothing special about me, I just see this one opportunity/danger in this election and took that for my motivation.

So I am making an appeal for two things: 1. Go to Nevada, even if it is a sacrifice. This will be the last time you will be called upon to go to a neighboring state in so important a circumstance. Some will be able to travel different places, but this is only a day drive, it is qualitatively different than subsequent needs will be. You can do this one without any advanced planning. 2. IF (if) you are able, physically able, volunteer to go to rural Nevada. Gird your loins and take the fight where the DNC-candidate can’t buy it. Only people can cover the area and we have the people. We are the only ones that have the people, if they make the effort to go.

I am poor and I am full of maladies. It was a sacrifice for me to go to Nevada, especially farther east and south than Reno. I made a quick decision to go and I went and did good. Do good, go to Nevada. Go to Rural Nevada if you can and help us save ourselves through your good work.