I expect I will catch heat from my Democrat friends who think we shouldn’t say anything negative about Hillary because it will damage her chance of defeating Trump if she wins the primaries. I disagree. These issues need to be revealed to Democratic voters now, while they can still vote for someone better.  People who don’t learn about these issues may vote for the wrong candidate. 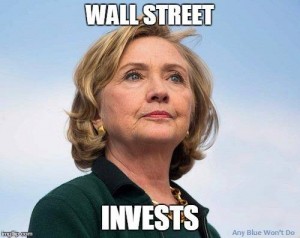 Many news sources are now clamoring for Hillary to release the transcripts of her 3 speeches to Goldman Sachs, for which she was paid $675,000 (Bill also made $200,000 speaking to Goldman Sachs) — but Goldman Sachs is only the tip of the iceberg. Between January 2013 and 2015 the Clintons took speaking fees from 150 different corporations and organizations, totaling $47,756,500 – that’s right $47.7 million!

The Clintons’ six-figure speaker fee scandal is not a right-wing media invention. Hillary’s own website released her family’s income tax returns for 2013 and 2014, and published the list of speeches Hillary Clinton and Bill Clinton made and the speaking fees they were paid during the year 2013. Several sites, including the Post News and The Zero Hedge released complete lists of the speaking fees from 2013 through the spring of 2015, when Hillary announced her campaign and they quit speaking for pay. These spreadsheets were turned over to the press by the Clintons. I put all of the figures into a database so I could sort and analyze them in detail.

Speeches to the healthcare industry earned the Clintons $5,041,500. At least one critic blamed those cash infusions from the health care industry for Hillary’s opposition to the single-payer system advocated by Bernie Sanders – a system Hillary supported in the 1990s.  See Hillary Clinton’s Single-Payer Pivot Greased By Millions in Industry Speech Fees.

What did she say during those speeches that could possibly be worth six figures ($225,000 to $400,000) for a one-hour speech? Apparently the tax-paying public may never know. See Hillary Clinton Laughs When Asked if She Will Release Transcripts of Her Goldman Sachs Speeches.  At the town hall meeting in Las Vegas on February 18, Sanders supporter Joe Saco asked her “why are you hesitant to release transcripts, or audio-video recordings of those meetings in order to be transparent with the American people regarding the promises, and assurances that you have made to the big banks?” She replied “I’m happy to release anything I have when everybody else does the same, because every other candidate in this race has given speeches to private groups, including Senator Sanders.”

During an interview Bernie Sanders jokingly pretended to hand over invisible transcripts of his  speeches to Wall Street, saying “there ain’t none.” The Hill reported “Sen. Bernie Sanders (I-Vt.) netted of $1,867.42 for two paid speeches and a television appearance last year, according to according to financial disclosure reports.” The reports show Sanders donated the money to charity.

The issue does not appear likely to go away.

“Everybody is doing it”

The Clinton’s campaign claims there is nothing wrong with the high dollar speeches, pointing out that many former presidents and major government officials earn high dollar speaking fees after  they retire from public service.

Is it legal? Certainly if she accepted speaker fees from corporations while serving as president or a cabinet official it would run afoul of legal ethics laws. It takes more than that to constitute bribery. 18 U.S.C. § 201(b)(2) makes it bribery for “a public official or person selected to be a public official” to “directly or indirectly, corruptly” demand, receive or accept “anything of value personally or for any other person or entity, in return for: (A) being influenced in the performance of any official act; (B) being influenced to commit or aid in committing, or to collude in, or allow, any fraud, or make opportunity for the commission of any fraud, on the United States; or (C) being induced to do or omit to do any act in violation of the official duty of such official or person…”

Critics say there is a big difference between making speeches after retiring from public service and doing it while contemplating a run for a public office, particularly the presidency. Some believe it a conflict of interest to take millions of dollars in personal income from a group with massive power and wealth that the public wants to be reined in – especially when Hillary says she intends to rein in the abuses of Wall Street.

Who are these groups the Clintons delivered their six-figure speeches to?

Some of the speaker fees were paid by speaker series, which sell expensive memberships in their group and present a selection of prominent speakers. Some are event promoters, and it could be that they represent speeches that some event promoter set up, advertised and charged hefty admission fees for. If that is the case those speeches are probably innocuous. Some of the entities listed in the Clintons’ speeches lists do not have enough of an internet presence to determine who they are, what they do, or how they could afford to spend $225,000 or more on a speech. It seems odd that they were able to spend so much money on a speech and not have a website.

The Clintons spoke to a number of trade association and lobbying groups within various industries and geographical areas – groups that would have an incentive to make connections to lobby for their industry or community. Note that none of these are trade unions, but trade associations of companies or CEOs. Interestingly a number of the groups are Canadian.

The Clintons spoke before 6 religious groups. Bill gave one speech at a New Age mediation and spirituality retreat, for the basic $225,000. The other 5 were Jewish groups, which netted them $1,475,000. No other religions were represented.

The “titans of the international corporatocracy” is the group that concerns me the most. No one gave these particular corporations that title officially – I am describing them that way because they exhibit the characteristics described in the Wikipedia definition of corporatocracy.

Many of the corporations the Clintons took speaking fees from are trusts – corporations so large they are near monopolies in their fields. Also in this group are firms that specialize in helping corporations mount hostile takeovers and other support services needed by trusts to gobble up the competition and become too big to fail. Some are corporations that failed and got bailed out by taxpayers — and corporations that have been broken up for anti-trust or for other regulatory violations – but have reconstituted themselves and are now as big and powerful as before.

Among the titans of the corporatocracy that the Clintons took speaking fees from, there are a number of corporations that have been convicted (or whose high ranking officials have been convicted) of regulatory offenses or other crimes.  Many more — though maybe not charged criminally — were fined or paid a civil settlement to get out of massive debacles they helped cause that harmed many people in the US and/or the world.

Entities the Clintons accepted speaking fees from were involved in: the Enron scandal, the Madoff Ponzi scheme, the derivatives debacle, the housing bubble, the Great Recession, and even Nazi Germany.

Before I get to the sordid details, let me say that there is quite a bit of overlap between the last two groups – captains of the corporatocracy and entities connected with scandals and debacles. Many of these largest, most powerful corporations in their class also have a string of scandals, regulatory enforcement actions, tax violations, anti-trust judgments, criminal convictions and fines. Maybe these are just battle scars for getting to the top, or the price of doing business, but I don’t think so. And if corruption is inherent in becoming so colossally large and powerful, we shouldn’t be letting corporations swallow up other corporations until they get so large they are out of control.

Please read Part 2 for details about the banking and financial corporations that paid six-figure speaking fees to the Clintons.

Brenda Grantland is a private attorney in Mill Valley California, with 30 years' experience primarily in asset forfeiture defense, as well as federal criminal appeals and victims rights and restitution. Brenda handles federal cases throughout the country, and frequently works with other attorneys or legal teams as a consultant or co-counsel.