… b. Influence-peddling and “getting things done”

I think a presidential candidate taking $47.7 million in speaking fees in the two years immediately prior to running for president — from corporations likely to have issues before the next president — is a new breed of influence peddling. It is particularly troubling when many of the firms are monopolistic corporations with a penchant for violating the law.

Influence peddling (also called traffic of influence or trading in influence) is using one’s position or influence in government or connections with public officials to obtain favors or preferential treatment for someone in return for money. Influence peddling is not necessarily illegal — take lobbying for instance. Lobbying is legal but highly regulated, and some lobbyists have been convicted of violating the laws.

The Organisation for Economic Co-operation and Development (OECD) has used the term “undue influence peddling” to refer to illegal acts of lobbying.

Even if not currently illegal under the strict interpretation of existing law,

“influence peddling bears the stench of corruption that may de-legitimise democratic politics with the general public.”

In some foreign countries influence-peddling, legal and illegal, is so widespread that it has to be factored into the cost of doing business there. The World Bank’s web page Informal payments to public officials gives a country-by-country breakdown of the percentages of companies doing business there that

“expected to make informal payments to public officials to ‘get things done’ with regard to customs, taxes, licenses, regulations, services, and the like.”

I ran a Google search for “payments to public officials to get things done” and saw that “get things done” was used on many other websites dealing with bribery and influence peddling. Note that many of them put the phrase in quotes or parenthesis to make it stand out. The Encyclopedia of the Nations has this page: 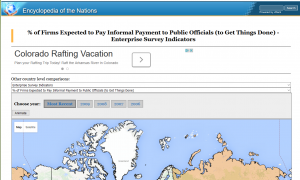 Google Books has an excerpt from Governance Matters V: Aggregate and Individual Governance Indicators for 1996-2005, by Daniel Kaufmann, Aart Kraay and Massimo Mastruzzi, which asks

“How common is [it] for firms to have to pay irregular additional payments to get things done?”

Another Google Books excerpt is from Wealth, Income Inequalities and Demography: The Long-Term Policy View talks about these payments as a bribe tax:

“Another administrative corruption question in the BEEPS concerns the amount paid in bribes, or ‘bribe tax’: ‘It is said that establishments are sometimes required to make gifts or informal payments to public officials to ‘get things done’ with regard to customs, taxes, licenses, regulations, services, etc.”

The usage of the term shows it is related to bribery and corruption. Enterprise Surveys’ page Corruption says:

“In some countries, businesses may require making unofficial payments or gifts to ‘get things done.’ The indicators below capture the prevalence of different types of bribery in 135 countries.”

See also the Google book Anticorruption in Transition: A Contribution to the Policy Debate. Clearly, in international affairs lingo, “to get things done” is a term of art that connotes bribery.

As Secretary of State, presumably Hillary Clinton came to know that term. It is curious that she chose to use it as her motto in her presidential campaign. Could it be code she is projecting to the corporations who paid her huge fees, to let them know she will deliver for them and “get things done” for them, despite the populist things she says to the contrary in her campaign speeches?